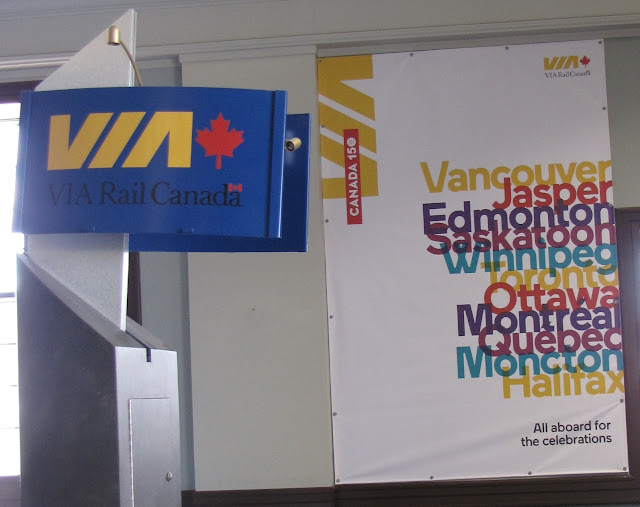 I’ve wanted to travel on The Canadian since, well, whenever I first found out that it existed. That transcontinental train trip has remained right at the very top of my lifelong dreams, and in many ways I expected it to remain that way for many years yet. Then, early in 2017, opportunity presented itself and before I knew it, that “someday” dream trip was booked and only a few months away.

The trip came together sort of by chance. I had ended up with a voucher from VIA for a free Halifax-Toronto roundtrip after an incident last year (a long story…), and I had to use that before June of this year. I could have used it for any trip to Ontario (I had a few of those), but I wanted to do something special with it – something I wouldn’t have done otherwise. So I got to thinking about options, and what I might be able to do.

Then one day I was looking through my VIA Préférence account, and realized that I had a coupon to book a trip on the Ocean or Canadian for 50% fewer points than usual. As it happens, I already had about the amount of points needed for a trip on the Canadian at full price, but the 50% off coupon would allow me to make that trip and still have lots of points left for other things. The only catch: it had to be used before the end of April.

Okay, so if I made the trip before the end of April I could do Halifax-Toronto on the voucher, and then Toronto-Vancouver on points (and without using them all). I could theoretically do the return too, but then there’s the slight issue of time…the Halifax-Vancouver train trip takes 6 days and 5 nights, and a full return would require about 2 weeks away, and the corresponding time off work.

I started to think about this but I wasn’t sure, because it would require taking a week off work, and I did have other plans later in the year that I’d need time off for. Then I realized something that completely sold the trip idea – if I departed on April 14th, I’d be leaving on Good Friday. With that Friday and the following Monday off as stat holidays, I could make the trip out and return (with a flight involved) and only take 4 days off work.

After a bit of deliberation, I decided why not…let’s do it! When this good of an opportunity presents itself, why not take it?

On the way west it would be 5 nights in a row on trains, with no stop-overs along the way. For the return, a fantastic sale with Air Canada helped fill in the gap.

Though it wasn’t the reason for this plan, I realized this would be an excellent and fitting way to mark Canada’s 150th. Coast to coast by rail, the way so many people have travelled this country for more than a century. What better way could there be to really see this amazing country, and meet people all along the way?

I always chronicle certain elements of my trips, but I decided this time to bring a journal and make a proper point of chronicling the whole thing as I went along. Between that and my camera, I have put together a record of this amazing journey, and now I’ll try to share that with you.

Over the next series of posts, I will chronicle the trip in segments by day. Starting with day 1…
Posted by TimH at 7/04/2017